How to Overcome the Left-Brain Barrier to Divinity

As an Amazon Associate, I may earn a little coffee money from qualifying purchases. Please read our disclaimer for more info.

The first and last time I have heard someone say the left-brain barrier to divinity was when I listened to the audiobook version of Robert Moore’s The King Within.

I thought it was a funny expression though there is some truth in this.

And if there is one thing I like, it’s wisdom wrapped up in humor.

Now you might be wondering: What the heck is a left-brain barrier to divinity?

Good question, and that’s what I’m going to answer in the following article.

What is the Left-Brain Barrier to Divinity? 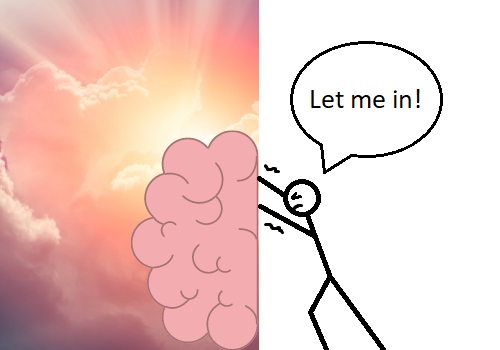 Firstly, I want to state that the expression left-brain barrier to divinity is a metaphor. Therefore, I will just briefly discuss the presumed functional difference between the left and right brain.

Maybe you have heard the statement that the right brain is the intuitive and creative side, while the left brain is the rational and logical side.

Although there is some truth to this statement, it is a simplification.

This is supported by the fact that there are people living and functioning with only one brain hemisphere. It appears that the brain is very adaptable. For instance, the speech area shifted from the left to the right hemisphere in patients who had their left hemisphere removed. (2)

Nonetheless, many people recognize that the left brain is connected to linear thinking.

And that is where we will start.

Divinity or spiritual truth is not something (at least not yet) that can be measured with scientific tools. This is because there is always a subjective component involved.

For example, someone might be having an enlightening experience and feels like he is melting together with all of existence. Subjectively this is a profound experience. But apart from the phenomenological nature, there is no way to quantify this experience with scientific tools.

Someone with a strong sense of science and logic might dismiss this as unimportant because you can’t prove it.

This happened to a lot of ancient Eastern teachings and wisdom in the west.

Hence, the left-brain barrier to divinity is when:

Reason and Logic are inhibiting your spiritual growth.

You are not recognizing that the highest truth cannot reveal itself through objective linearity but through subjective non-linearity.

The Left-Brain Barrier to Divinity and Men

Usually, men are considered to be more rational and logical. They often emphasize the superiority of facts over emotions.

Women, on the other hand, are often more in touch with their emotions and intuition than men.

You can see this as an expression of the feminine and masculine.

I don’t think that one is superior to the other. I believe that we need both reason and intuition for a holistic view.

In science, for instance, the rational and logical side is of greater value while in social and humanitarian areas the emotional and intuitive side plays an important role.

Because science is a male-dominated domain, men seem to be more under the influence of the left-brain barrier to divinity, which hinders their spiritual growth.

For me personally, it was hard to change my thinking. To accept that science might not equal the greatest truth.

I’m not trying to devalue science or saying we should forget about science. It is without a doubt important and brought us countless significant insights.

However, we also have to consider that science is often lacking the tools or is too tight of a box to investigate areas of spiritual truth. 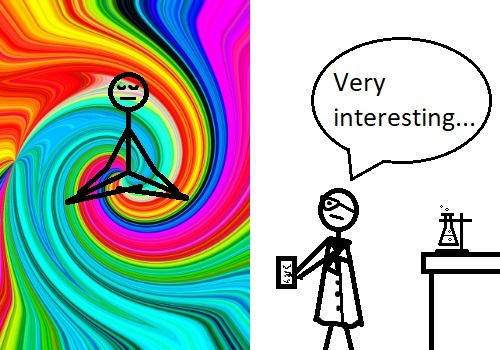 Nonetheless, there are more scientists and more scientific disciplines that push the boundaries of science to overcome the left-brain barrier to divinity.

Some modern fields such as transpersonal psychology, neuroscience, and quantum physics seem to merge science and spirituality.

However, it still seems that the barrier is there. And perhaps we need to accept that there is a barrier that science cannot overcome.

A barrier that requires us to leave logic and thought behind.

A barrier we can only overcome when we turn towards experience and become both the object and the subject.

Perhaps at some point, a phenomenological approach is the only way to quench our thirst for more insight and growth.

“To arrive at certainty, anything outside immediate experience must be ignored, and in this way the external world is reduced to the contents of personal consciousness. Realities are thus treated as pure ‘phenomena’ and the only absolute data from where to begin.” (1)

While this sounds reductionistic, I believe, that Husserl has a fair point. Because everything we perceive, even objective observation, stems from a subjective point of view.

Therefore, there is no way to validate if two people, looking at a tree, are actually seeing the same tree.

Maybe there is a point in the fact that every one of us has a unique experience. Perhaps we should move towards subjective experience and not away from it.

In most cases, phenomena have something to tell us. We just have to be ready to listen.

Overcoming the Left-Brain Barrier to Divinity

As stated before, to overcome the limitation of the rational mind we have to open up to experiences that don’t require linear logical thinking.

One way to this is to engage in practices that can create space between you and your thoughts.

For me, this started with meditation. In the beginning, meditation was just a way to deal with my emotions and overthinking.

However, eventually, I had these glimpses into perfect silence. Meditation opened the possibility of another way of perception and being in the world.

A way of perception and being that is not clouded by the never-ending chatter of the mind.

This introduced the idea that perhaps there is a truth that can’t be grasped nor understood with the mind.

You might also want to try practices that involve movement and creativity. The ones I like are yoga, martial arts, and painting.

To overcome the left-brain barrier to divinity it also helps to see yourself as a holistic being consisting of body, mind, spirit, and shadow.

You can also express this through your practices. You do this by integrating every part to increase your well-being, awareness, and transformation.

This is the concept behind integral life practice which emerged out of Ken Wilber’s integral theory.

However, the type of practice is not as important as the intention. I think the goal is to be a perfect presence, divinity expressing itself through you. Such practice will without a doubt further your spiritual growth.

In the end, it’s all about opening up to the possibility that we are so much more than we think we are.

What do you think about the concept of the left-brain barrier to divinity? Feel free to leave a comment below! I’d love to hear from you!

Hey guys! My name is Luka and I am the creator of Mindfulled! We believe that mindfulness can be applied to all areas of your life and is a key factor in living a happy life.

Latest posts by Luka (see all)